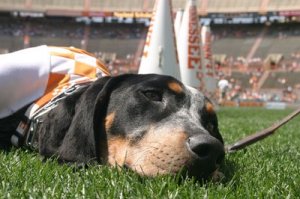 The University of Tennessee Athletic Department has seen better days. The football program has had three different head coaches in the past six years. The basketball program is looking for their third head coach in three years. Things are not going well in Knoxville and the Volunteer fans are not happy.

Thirty-six thousand Tennessee fans sign a petition to for the athletic department to fire Head Basketball coach, Cuonzo Martin; and rehire former Head Basketball coach, Bruce Pearl. Pearl was a fan favorite, but the athletic department fired Pearl, after he broke NCAA rules during a recruitment process. Throughout the turmoil, Cuonzo maintain a level head and lead his team to the Sweet 16, and was one bad call away for the Elite 8.

Fan favorite, Bruce Pearl, was hire by SEC foe, Auburn. The Bruce Pearl dream was dead and fans had to eat their petition and apologize to Cuonzo.

Cuonzo would get the last laugh and leave Tennessee for California. Cuonzo is the new head coach at Cal.

I believe the downfall started when the fan base expectation became too high. Fans and alumna pushed out Head Football Coach Phil Fulmer after only two losing season in four years. Fulmer was the Calipari of college football. He was a great recruiter that spectators believe could not coach. Mike Hamilton was the AD at the time of Fulmer was force to step down and he hired Lane Kiffin who only coach at Tennessee for one season. Hamilton’s next bad hire was Derek Dooley. Mike Hamilton tenure would end after the Bruce Pearl investigation and firing.

Will Tennessee ever recover from the many bad decision and high expectation from the fan base? Time will tell. Let us see whom they hire to replace Cuonzo, one coach already turn down the job this week.