Posted on February 10, 2014 by GetRealSports 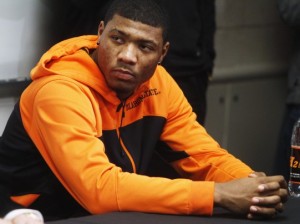 I did not know much about Marcus Smart, until he played my Memphis Tigers for the first time back in November. He scored a career high of 39 points against the Tigers and ESPN could not stop talking about him. They praised him repeatedly, for coming back to school. ESPN was making him the poster child for coming back to school. This season in college basketball, most of the talk was about the freshman class and the big impact that these freshman will have in the NBA next season. Therefore, Marcus is the counteraction to all the freshman hype.

This season started great for Marcus Smart and Oklahoma State Cowboys. His team was consider a Final Four contender and his decision to come back to school was a good idea to most. The Cowboys are struggling now. They lost key players to injuries and suspension. Marcus Smart and the Cowboys are no longer contenders for the Final Four and their season is in big turmoil. Everyone by now knows about Marcus Smart pushing a fan at Texas Tech and his breakdown at a home game, where he kicked a chair.

Marcus Smart could not imaging he would be experiencing a season, like this current season. I believe Marcus Smart should have never return for his sophomore season. I believe this before the kicking of the chair and pushing a fan. One year is enough; Marcus should have entered the NBA Draft, last season. He was considered as top ten pick in the 2013 draft, but this year’s draft, his stock is dropping fast.

I firmly believe, if you have the talent, why go to school or why stay for another year? A basketball player can always go back to school and get an education, but your draft stock can change at any time. Smart is going to lose a lot of money because of this decision. 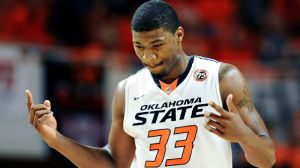