Posted on February 2, 2014 by GetRealSports 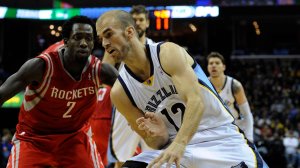 The bag up point guard position has been a revolving door for the Memphis Grizzlies. Every year there is a new player trying to win the position to bag up 2014 All Star’s snub, Mike Conley.

92.9 ESPN Radio host, Chris Vernon had a segment on his show, called, “The Lionel Hollins’s Backup Point Guard Garbage Ben”. The segment was a little humor about all the backup point guards that have not fared well with the Grizzlies.

Nick Calathes is the new backup point guard this season for the Grizzlies. It is very safe to say that, Nick has not had a great start at this position. The verdict is still out on Calathes, but tonight Nick was great. Nick’s improve play help the Grizzlies to beat the Milwaukee Bucks tonight, Grizzlies 99-90. He posts a career high against the Milwaukee Bucks. Starting for injured Mike Conley, Nick Calathes scored a career high, 22 points. Nick also post a career high for three pointers made tonight. Nick made four of the five three pointers he attempted. Nick hit three of his four three pointer in the fourth quarter to help seal the win against the Bucks.

Nick’s confidence is growing every game and with Mike Conley out with and sprain ankle, the Grizzlies need Nick to keep improving. http://www.nba.com/video/games/grizzlies/2014/02/01/0021300702-mil-mem-1h.nba