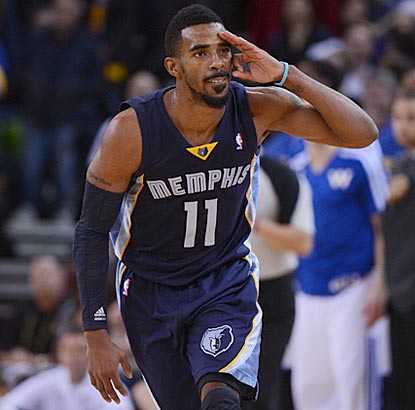 The point guard has become the most important position in the NBA. The NBA has become more of a pick and roll league and teams have to have a creditable point guard to run this play.  The past six NBA Drafts, three point guards have been selected number one.

The Memphis Grizzlies selected Mike Conley with the fourth pick of the 2007 NBA Draft. Grizzlies fans were very confused with the pick of Conley.  There was already a young point guard on the roster, name Kyle Lowry. I personally did not like the pick, because Conley had just torch the University of Memphis in the Elite 8 of the NCAA Basketball Tournament.

Conley struggle his first couple of years in Memphis. The front office considered trading Conley, but former coach Lionel Hollins, saw something in Conley, that no one in Memphis could see. The franchise decides to trade Lowry and give the keys to Conley, to lead the team in the future.

Conley has gotten better each season; he has been in the NBA. His numbers have increase each year. Conley’s scoring average jumps four points this season, form 14.6 to 18.0 ppg. Conley is also a high-quality defender. He has been in the top three in steals the past two seasons and he made second team all-defense last season.

The NBA is load with good point guards, but I argue that Mike Conley is the best out of the bunch. I know that many people will disagree with me, but I am not afraid to stand alone on my opinion.

Conley has taken his game to another level. He has competed with the best point guards and held his own. His growth at the position, help lead the Grizzlies to their first appearance in the Western Conference Finals, last season.

The Grizzlies have struggle out the gates this season, with an injury to one of their three cornerstones, Marc Gasol. Conley’s improve play has helped the Grizzlies to stay around 500 until Gasol’s return. Now with the return of Gasol, the Grizzlies look posed to make another run at a championship.

Conley has shown he can lead this team and deserve to be an All-Star this season. He leads the Grizzlies in scoring and he has taken over many games this season. He has become an elite player in the NBA. Teams can no longer look past him; they are now game planning to stop him.

The main reason I believe that Conley is the best, because he plays both ends of the floor. Most point guards are not good defenders. Chris Paul is the only other point guard that has top defensive numbers and we saw what Conley and Grizzlies did to him last season.

Soon the world will see what Mike Conley has become, the best point guard in the NBA. Just remember, who told you first.